History Reminds Us of Importance of Disaster Planning 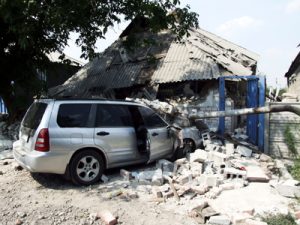 Every year, natural disasters take their toll on different parts of the world. Some years, the East Coast seems to be battered by hurricane after hurricane. Other years, there might be an uptick in tornadoes in the plain states, or Japan could get hit by a killer tsunami. Many scientists are predicting California is in for a major earthquake soon since it’s been some time since the last major San Andreas Fault quake.

Having a disaster plan in place is critical for your company and your employees. Many disasters hit with no warning. Will your employees know what to do? Will you have people to call when the water settles, for example, to get the restoration process started? Will you know where to find all the documents you need? There are a lot of questions to be answered. At G.S. Jones Restoration and Consulting, we specialize in helping companies pre-plan for disasters and be as prepared as possible for the worst.

So … what is the worst, you ask? Here are some of the biggest natural disasters to strike in the last century, according to The Economic Times and LiveScience.

It’s hard to believe that even seven years later, parts of Haiti are still trying to recover from the magnitude 7 earthquake that hit the capital city of Port-au-Prince. This quake also killed a quarter of a million people and injured 300,000 more. Another 1.5 million people lost their homes and spent weeks, months, or even years living in makeshift camps.

She started as a category 1 storm in the Atlantic and quickly grew to be the most costly natural disaster in U.S. history, roaring through New Orleans with 125 miles per hour sustained winds. The winds and storm surge left 80 percent of the city under water, killed almost two thousand people, and caused more than $125 billion in damage that took years to restore.

This tsunami was triggered by a magnitude 9 earthquake beneath the floor of the Indian Ocean. Scientists say the quake produced energy equivalent to 20,000 atom bombs, like what was dropped on Hiroshima. This tidal wave impacted more than 15 countries and killed a quarter of a million people. One-point-seven million more were displaced from their homes.

The Chinese dubbed this storm “Super Nina” because she packed such a punch with her 70 mph+ winds and torrential rain. That rain triggered the collapse of a major dam. An estimated 229,000 died as a result of the storm.

Historians say the Haiyuan earthquake was the largest to hit China in the 20th century. It’s hard to imagine, but tremors from the 7.8 magnitude earthquake could be felt as far away as Norway. This earthquake caused damage across seven provinces, lead to massive landslides, and killed more than 270,000 people.

The strong San Francisco earthquake lasted for more than a minute on April 19, 1906. As the earth shook, natural gas mains broke and started fires that would cause the city to burn for four straight days. By the time the fire was put out, more than 500 city blocks were destroyed and 3,000 people killed.

Emergency situations happen and cleanup and restoration are always needed. If you find yourself facing a natural disaster emergency and need professional services, contact a qualified and experienced team that cares about you. Contact GS Jones Restoration.